Is Your Team Suffering from a Lack of Commitment? Here’s How Leaders Inspire Their Teams to Action

In his video, Patrick Lencioni discusses his bestselling book, 5 Dysfunctions of a Team. He outlines the root causes of team dysfunction and presents ways to identify and solves these issues. The five dysfunctions are:

You can watch the video below:

A lack of commitment

In this article, we’re going to discuss dysfunction three – a lack of commitment – and how it plays into the wider issue of poor strategic execution within your company, and how leaders can inspire teams to commit to the cause.

Teams who demonstrate a lack of commitment to their goal breed a lack of confidence and a fear of failure. That fear can paralyse team members into inaction even when they are committed to the strategic goals. There will be ambiguity over the team’s direction and priorities, and windows of opportunity slam shut without action, because of delays.

Team members will often second-guess each other and will analyse and debate initiatives without actually taking action. No one can make a decision that sticks.

This, in turn, creates animosity, as members of the team who are committed and accountable feel resentment toward those who don’t pull their weight. People think, “Why am I doing so much more than this person? If this is the level of commitment that’s expected, then I can dial my commitment back to match.” This, in turn, can drag the whole team down and derail any positive progress toward achieving strategic outcomes.

What can you do to fix the problem?

If this is what your team looks like, then you may need to consider taking the following steps to bring back a sense of commitment to strategy:

With your team united and each member committed to seeing results, then your strategy will soon become reality. Is your team suffering from ambiguity, and you’re struggling to execute on strategy? Download our free guide, The Four Cornerstones of Strategic Execution. 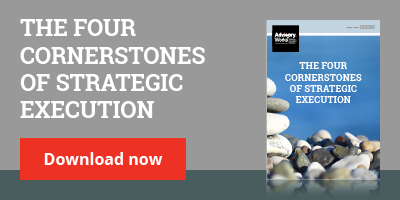 The post Is Your Team Suffering from a Lack of Commitment? Here’s How Leaders Inspire Their Teams to Action appeared first on Advisory Works - 13 May, 2019.

Fully Immersed: Strategy on the water with Advisory.Works

Bulletin: Room to breathe – but not to relax

Hybrid work is a symptom of a much bigger problem

Turning Strategy on Its Head to Successfully Adapt to Change